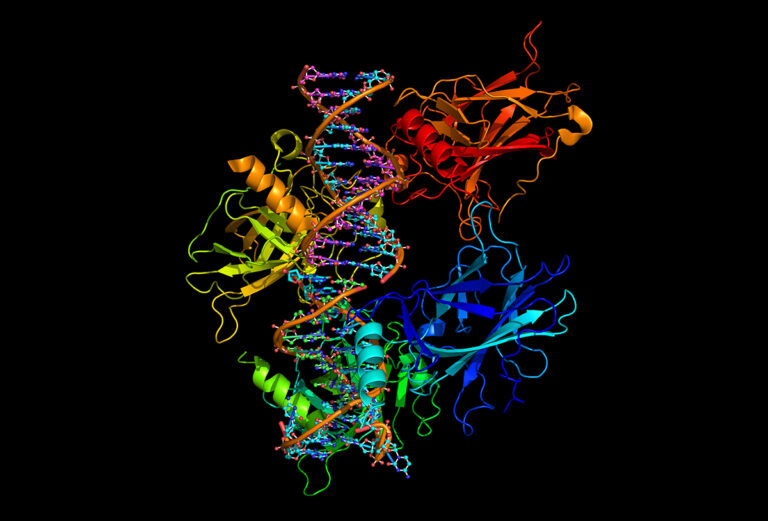 Proteins are large biomolecules, or macromolecules, consisting of one or more long chains of amino acid residues. Proteins perform a vast array of functions within organisms, including catalyzing metabolic reactions, DNA replication, responding to stimuli, providing structure to cells and organisms, and transporting molecules from one location to another. Proteins differ from one another primarily in their sequence of amino acids, which is dictated by the nucleotide sequence of their genes, and which usually results in protein folding into a specific 3D structure that determines its activity.

Once formed, proteins only exist for a certain period and are then degraded and recycled by the cell’s machinery through the process of protein turnover. A protein’s lifespan is measured in terms of its half-life and covers a wide range. They can exist for minutes or years with an average lifespan of 1–2 days in mammalian cells.

Chromatophores are pigment-containing and light-reflecting cells, or groups of cells, found in a wide range of animals including amphibians, fish, reptiles, crustaceans and cephalopods. Mammals and birds, in contrast, have a class of cells called melanocytes for coloration.

Chromatophores are largely responsible for generating skin and eye color in ectothermic animals and are generated in the neural crest during embryonic development. Mature chromatophores are grouped into subclasses based on their colour (more properly “hue”) under white light: xanthophores (yellow), erythrophores (red), iridophores (reflective / iridescent), leucophores (white), melanophores (black/brown), and cyanophores (blue).

Chromatophores are sometimes used in applied research. For example, zebrafish larvae are used to study how chromatophores organise and communicate to accurately generate the regular horizontal striped pattern as seen in adult fish.

Latest studies about proteins and Chromatophores:

In purple bacteria, photosynthesis is carried out on large indentations of the bacterial plasma membrane termed chromatophores. Acting as primitive organelles, chromatophores are densely packed with the membrane proteins necessary for photosynthesis, including light harvesting complexes LH1 and LH2, reaction center (RC), and cytochrome bc1. The shape of chromatophores is primarily dependent on species, and is typically spherical or flat. How these shapes arise from the protein-protein and protein-membrane interactions is still unknown. Now, using molecular dynamics simulations, we have observed the dynamic curvature of membranes caused by proteins in the chromatophore. A membrane-embedded array of LH2s was found to relax to a curved state, both for LH2 from Rps. acidophila and a homology-modeled LH2 from Rb. sphaeroides. A modeled LH1-RC-PufX dimer was found to develop a bend at the dimerizing interface resulting in a curved shape as well. In contrast, the bc1 complex, which has not been imaged yet in native chromatophores, did not induce a preferred membrane curvature in simulation. Based on these results, a model for how the different photosynthetic proteins influence chromatophore shape is presented.

Purple photosynthetic bacteria harvest light using pigment-protein complexes which are often arranged in pseudo-organelles called chromatophores. A model of a chromatophore from Rhodospirillum photometricum was constructed based on atomic force microscopy data. Molecular-dynamics simulations and quantum-dynamics calculations were performed to characterize the intercomplex excitation transfer network and explore the interplay between close-packing and light-harvesting efficiency.

The pigmented membranes of photosynthetic bacteria, and fractions derived from them, have been analyzed by electrophoresis in polyacrylamide gels, following their dissolution by exposure to sodium dodecyl sulfate and mercaptoethanol. Purified photosynthetic reaction centers from Rhodopseudomonas spheroides yielded three components of apparent molecular weights 27, 22, and 19 kilodaltons, confirming the findings of Feher and collaborators. The density of staining suggested that RC’s contain these components in a molar ratio of 1:1:1. The RC protein comprised about 25% of the total chromatophore protein. Two major chromatophore proteins, distinct from RC protein, had apparent molecular weights of 46 and 11 kdaltons. The RC proteins could not be found in any preparation made from the pigmented but non-photosynthetic mutant strain PM8 of Rhodopseudomonas spheroides. Triads of bands suggesting the three RC proteins could be discerned in preparations from Rhodospirillum rubrum, Rps. capsulata, and Rps. palustris, but not Rps. gelatinosa or Rps. viridis. Antibody specific toward RC’s from Rps. spheroides did not react with any component from non-photosynthetic mutant Rps. spheroides, nor from any of the other species of photosynthetic bacteria mentioned here. The Coomassie Brilliant Blue stain was observed to be fluorescent on some bands in the gels and not on others. With the RC triad the band of highest molecular weight was fluorescent and the others were not; this set of bands was accordingly very easy to recognize in crude preparations.

Besides the study of the static structure of biologically important macromolecules, investigation of the dynamic properties has gained much interest in the last few years. X-ray diffraction on myo~ obin crystals [l] revealed structural dynamics. Evidence of a large number of confo~ ational substates of a molecule was found. Molecules in different conformational substates have the same gross structure but differ in local configurations. To separate the static from the dynamic disorder in the myoglobin crystals, X-ray data and Mossbauer measurements on the heme iron of myoglobin were compared.

In order to estimate the degree of orientation of the α-helices of intrinsic proteins in photosynthetic membranes, polarized infrared spectroscopy has been used to measure the dichroism of the amide I and amide II absorption bands of air-dried oriented samples of purple membranes, chloroplasts and chromatophores from Rhodopseudomonas sphaeroides. Using purple membrane, in which the orientation of the α-helices is precisely known (Henderson, R. (1977) Annu. Rev. Biophys. Bioeng. 6, 87–109), as a standard to calibrate our measurements and estimating the mosaic spread (extent of orientation) of the membranes from linear dichroism measurements performed in the visible spectral range, it is concluded that in photosynthetic membranes, the α-helices of intrinsic proteins are tilted at less than 40° with respect to the normal to the plane of the membrane.