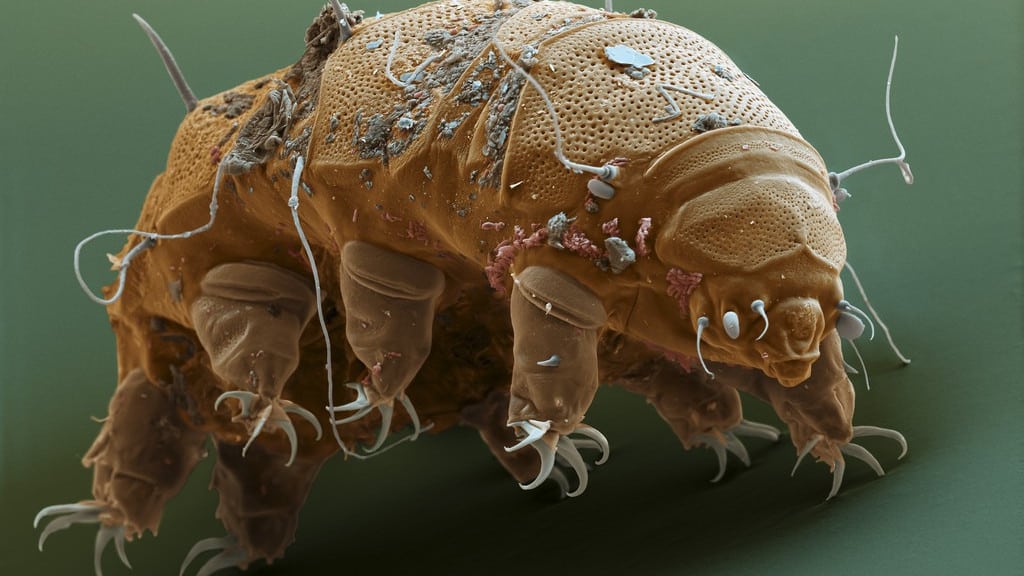 Planet earth has been the home for a number of species, from micro species to giant animals, it has diverse living creatures. Some being adaptive to the changing conditions survive, while some become extinct. From a tiny creature to a giant one every species is having different traits and features. But it is surprising to know that there is a tiny creature that can survive in extreme conditions and is known as the toughest creature on the earth. The extreme weather conditions, being it boiling water to icy cold, no matter whether they have water or food to survive for life, but still they can manage and live a longer life.

The extreme conditions which would certainly kill us, but they enter a dormant state to allow survival. Almost indestructible, they are the only animal that can survive the vacuum of space.

The creature is Tardigrade and is very often known as water bear since they resemble to a bear or piglet. One will be amazed to know that Tardigrades can continue to survive in extreme hot or cold conditions that is as hot as more than 300 degrees F or as cold as minus 328 degrees F and can even survive extreme pressure and has a lifespan for a very long time in adverse conditions also.

History of evolution of Tardigrades: Let’s explore when they were known

The more tardigrades are studied, the more complex they appear to be. Being one of the individual species know for surviving the extreme conditions make them very ancient. It has been said that the fossils of tardigrades were found over 500 million years ago. That is, they have been related to the Cambrian period when actually the first complex animals were developing. After the discovery of such fact, it was understood that they were different from the others and were really special. German zoologist Johann August Ephraim Goeze in 1773 was the first who described Tardigrades and called them little water bears. After a few years it was discovered that they have superpowers by the Italian clergyman and scientist Lazzaro Spallanzani. Later that Spallanzani observed under a microscope by adding water to sediment from a rain gutter that there were hundreds of tardigrades inside it. Earlier in 1702, Dutch scientist Anton van Leeuwenhoek also observed under microscope and found these creatures swimming and crawling in the water.

Know what Tardigrades are?

Tardigrades are tiny, insects like creature covered in a tough cuticle and is virtually indestructible. About 13,000 species of tardigrades are found worldwide. They have eight legs and hands with four to eight claws on each which help them to move around. This tiny adorable species has one of the extraordinary features that they are almost indestructible and can even stay alive in outer space. They are microscopic animals that can even survive in boiling water, at deep-sea trench or even in the cold, dark vacuum of space.

Tardigrades are closely related to insects and crustaceans but they look similar like pigs or bears. Therefore, they are also called “Water bears”. They have eight stubby legs, long and plump bodies. Tardigrades are semi-aquatic creatures. They can be found in both watery as well as terrestrial environments. They can survive in oceans, lakes, mountains, forests and even in sand dunes. There is no place where their presence cannot be seen; from glaciers to active lava fields, they are everywhere in existence. However, they are commonly found living in moss.

Now, you may be wondering what they eat? These tiny tardigrades eat:

Some of the tardigrades are carnivorous and they can even eat other tardigrades. Many scientists even mention that it is possible that tardigrades may have been the first animals to settle on dry land leaving the ocean. There has been no fact yet known that Tardigrades pose threat to humans. Still the scientists are striving to identify the species of tardigrade that can spreads disease.It is even accepted that there are hundreds of species belonging to Tardigrada that may have existence for so long time from the day sun might have started to shine.  Just because of these reasons and their ability to continue to survive in such extreme conditions, this has drawn the attention of scientists and they even say that tardigrades can be key to human survival in the future times. Even many researches are being going on tardigrades that will surely help humans to stay alive and search life in outer space even.

There have been many assumptions about what is the source behind such a different trait that these creatures possess.  Some of the studies state that “the secret to this tiny creature’s strength is somewhat that is called cryptobiosis. It is a process which almost completely shuts down all metabolic processes during extreme circumstances.

Facts about Tardigrades that would astound you:

Tardigrades are considered as Nature’s toughest animal and let’s see what are the reasons for the same:

But in a recent experiment, these creatures were stress tested by firing tardigrades from a gun. These creatures defy death everytime.

According to the article published in sciencenews.org , Tardigrades survived smashing into targets at speeds up to about 825 meters per second, researchers report online May 11 in Astrobiology. But speedier water bears blew apart on impact. The findings hint that even intrepid little animals like tardigrades would struggle to survive crash-landing on a new planet.

That puts new limits on the possibility of panspermia — organisms hitchhiking between worlds on planetary debris kicked up by meteorite impacts. Knowing whether life is up to the challenge of planet-hopping could help answer how life got started on Earth and gauge the risk of Earthly lifeforms on spacecraft contaminating other places in the solar system, says Samuel Halim, a planetary scientist at Birkbeck, University of London not involved in the work.

Still there are many misconceptions that whether Tardigrades still exists? But the real facts says that yes, they do. They are a complete animal species in themselves. There are still many researches that are continuously going on this small creature.

A. Traspas and M.J. Burchell. Tardigrade survival limits in high-speed impacts — implications for panspermia and collection of samples from plumes emitted by ice worlds. Astrobiology. Published online May 11, 2021. doi: 10.1089/ast.2020.2405.

PrevPreviousMathematics: From ancient times to modern science has been a complete dimension of everything
NextTHERAPEUTIC CLONING – A BLISS OR MISSNext