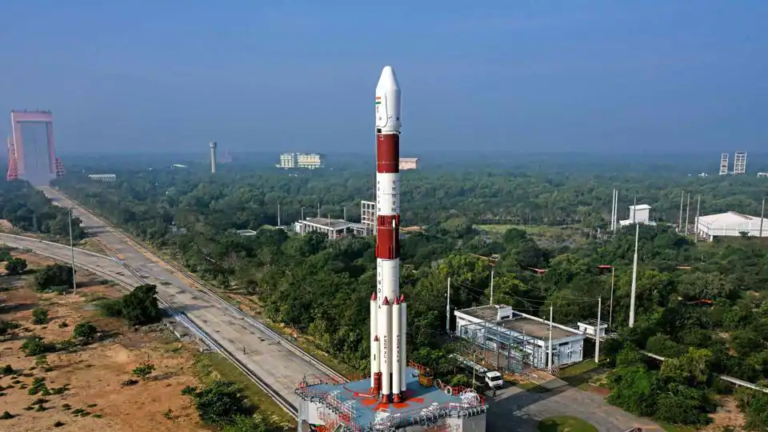 Indian space research organization on Thursday completed its 2nd mission of the year 2020. Due to the coronavirus pandemic, the year has not been much productive for the organization as most of the projects have been delayed or disturbed. The mission was completed by ISROs powerhouse pslv (polar satellite launch vehicle). The vehicle was seen sailing away piercing the clouds which was a delight to watch. The whole country watched the view through the television news channels live streaming from the station. With every mission, Isro is growing bigger and bigger as a space agency. Also, it’s an inspiration from many new Indian startups who are going to be ruling the future space industry as private players.

WHAT WAS THE MISSION?

The mission was to place a CMS-01 satellite in the sub geosynchronous transfer orbit. Launched from the second launch pad of Isro Sriharikota, Chennai at 3:41 pm yesterday. 20 minutes later the satellite was successfully placed inside orbit marking it’s the 42nd communication satellite launch of the country.

The satellite would be moved to a specific orbit on December 21 after a series of processes using its propulsion system that would be checked by the ground staff in the center. The satellite launched is to replace the old GSAT-12 satellite which is to retire after completing its 11 years in orbit.

The primary work of the satellite is for metrological and network purposes. It will provide the c band spectrum coverages in the areas like Andaman-Nico bar and Lakshadweep Island. The lifespan of this satellite is seven years.

This launch also marked 77 launch vehicle missions from the Sriharikota station and the only other launch in this pandemic situation after PSLV-C49, which placed 1 Indian and 9 other foreign satellites in the orbit for different purposes like weather imaging, meteorological functions and network band spectrum.

TECHNICAL SPECIFICATIONS OF THE LAUNCHED SATELITE

PSLV-C50 lifted off from the Second Launch Pad of SDSC SHAR at 15:41 hours (IST) conveying CMS-01. After a trip of around 20 minutes 12 seconds, the vehicle infused the satellite into its proposed circle as arranged.

After infusion, the sun-powered boards of CMS-01 were naturally conveyed and ISRO’s Master Control Facility at Hassan has expected the control of the satellite. In the coming days, circle raising manoeuvers will be executed to situate the satellite in the Geostationary Orbit at its assigned area.

PSLV-C50 is the 52nd trip of PSLV and the 22nd trip of PSLV in ‘XL’ design (with 6 lashes on engines). This was the 77th dispatch vehicle mission from SDSC SHAR, Sriharikota.

Plus, the vehicle effectively dispatched two rocket – Chandrayaan-1 out of 2008 and Mars Orbiter Spacecraft in 2013 – that later went to Moon and Mars separately.

After the successful launch of the satellite, the user took it onto all their social media handles saying all the details about the mission. And in the media briefing, these exact statements were said by the director of ISRO K.Sivan.

I am extremely happy to declare that the PSLV-C50 successfully injected CMS-01 communication satellite precisely into the predefined sub-Geosynchronous Transfer Orbit. In another four days from now, the satellite will be placed into the specified slot into the GTO,” he said.

After the Polar Satellite Launch Vehicle (PSLV-C50) effectively positioned the interchanges satellite CMS 01 in a circle on Thursday, ISRO administrator K Sivan reported that the following mission of the trustworthy rocket would convey satellites created by Indian space new businesses and organizations.

This comes only a half year after the government authority declared the opening up of the space area to private players with the origin of the Indian National Space Promotion and Authorisation Center (IN-SPACe).

“The following PSLV mission is unique for the whole nation. As of late, we have brought the space change and opened India’s potential in the space area started by the government of India. Presently, the principal satellite by a beginning up called Pixxel India called Anand which is an Earth Observation Satellite will be dispatched on PSLV C51. Alongside Anand, two additional satellites under the space change will be dispatched – one by Space Kidz India and another by a college consortium called UnitySat,” said Sivan after the dispatch of CMS 01.

The satellite by Pixxel India is the first in a progression of the constellation of Earth Observation Satellites that will give worldwide inclusion each 24-hour; empowering associations to recognize and screen worldwide marvel in close to constant. The information will be accessible on an Artificial Intelligence-based stage, making the extraction of the information simple. It will have utilizes in horticulture, ranger service, metropolitan observing, and atmosphere.

Aside from the PSLV-C51 mission, the Indian Space Research Organization is likewise preparing for the maiden flight of the little satellite dispatch vehicle. The SSLV will have the ability to dispatch a light 500-kilogram satellite in the lower Earth circle.

The new rocket will cost about Rs 30 crore, contrasted with the Rs1 20 crore it expenses to produce the presently utilized PSLV. It can likewise be gathered by a group of six inside seven days, in contrast with a group of 600 individuals and a couple of months that takes to amass a PSLV. The SSLV has been created by ISRO primarily for business dispatches.

The executive likewise guaranteed that work was progressing on the expensive missions.

“We have a parcel of work close by; there are missions like Chandrayaan 3, Aditya L1 and Gaganyaan for which exercises are going on. We will have the missions at the soonest. Of course, group ISRO will adapt to the situation and do the needful to fulfil the need by the Indian government,” said Sivan.

Chandrayaan 3 would be only a lander-rover mission which will utilize the current India orbiter from Chandrayaan 2 mission to speak with Earth. The Chandrayaan 3 mission was declared after the disappointment of the last mission to endeavour a delicate landing. It was to occur in late 2020 or mid-2021, a cutoff time ISRO is probably going to miss because of the pandemic.

Aditya-L1 is India’s first sun-powered mission which will see a satellite travel 1.5 million kilometres from Earth to the L1 point. The L1 or Lagrangian point, between the Earth and the Sun, is the place where the gravitational draw of both the bodies on the satellite is equivalent to centripetal power expected to keep it in a circle.

Concerning the Ganganyaan mission, which expects to put Indian space travelers in a low earth circle, the first of the two arranged automated missions was to occur in December 2020.